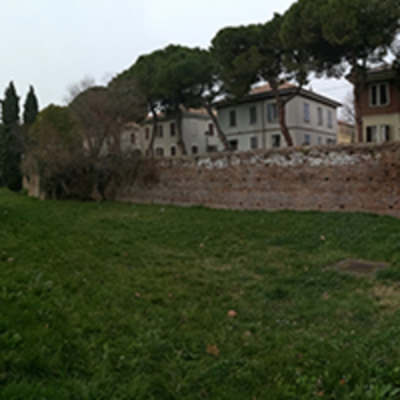 The green area of Cervi Park is coasted by Medieval walls with ramparts  which directly overlooked on the Ausa, before reclamation in the ‘70s. Federico II built these walls, and two centuries later Malatesta’s family strengthen them.

They are Rimini’s most ancient boundaries, dating back to the Republican age and still visible on the sides of the Arch of Augustus. These walls presumably protected only the southern part of the built-up area, from  Augustus Arch to Tiberius Bridge, while the remaining part was bordered by the Adriatic sea and the Marecchia River.

After the first barbarian incursions, which caused the destruction of several domus of the city centre, in the second half of 200 d.C., a new fortified system incorporating the amphitheater was built along the maritime side. This structure remained unaltered until the Middle Ages when  new military priorities required the edification of a new fortified circle.