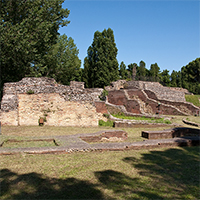 The Roman Amnphitheatre, today only partially preserved, was built on the outskirts of Ariminum, near the coastline, which in ancient times was closer to the city. Here you could watch gladiator fights that drew a large public (as many as 12,000 spectators).  The Amnphitheatre was built in the 2nd century AD, as revealed by an Emperor Adrian’s coin that was found in a wall brickwork. The austere structure of the building presented an upper level and a lower level, and the façade was made of a 60-arches portico. A rather  impressive sight for those who were arriving from the sea.