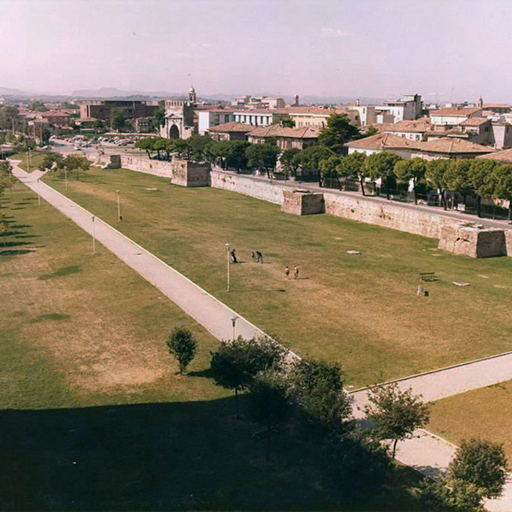 From the 60s until today several urban parks have appeared along the Ausa creek and in the Fornace Fabbri area.

It is dedicated to the memory of Alcide Cervi, Cervi brothers’ father , who died in the Second World War. The old Ausa  riverbed is now a verdant park which goes from the Augustus Arch to Roma Street. Within the park you can find a memorial devoted to the Partisan Resistance, built by Elio Morri (1973-1975).

Olga Bondi Park: devoted to the memory of Olga Bondi, young victim of fascism from Rimini.  This park is the extension of Alcide Cervi Park.

Fabbri Park: its name derives from the ancient Fornace Fabbri, placed near the park. It covers the area  between Olga Bondi and Ghirlandetta parks.

John Paul II Park: it is known as “Parco della Cava”, after the old clod quarry which was replaced by the current artificial lake. It represents one of the biggest parks of the city, second for extension, 14 acres, and surely the one with the most beautiful landscape. Not far from the city centre , on the left of Via della Fiera and in the nearby of Centro Civico Commerciale Ausa, It is directly connected to Fabbri Park and to Poderi della Ghirlandetta Park . It was inaugurated in 2011 with the new Palacongressi.

Elio Morri’s activity was significantly linked to the city of Rimini,  his hometown and source of inspiration, many of his works can be seen in the landmarks of the city.  Besides “The Monument to Resistance” there are several works in the old town that are easy to reach:

Province’s Palace: Bas-reliefs on the theme of work.

Other works are reachable through pleasant walks:

Covignano:“Via Crucis” climb to the Grazie.

The monument is located at the beginning of the park “Alcide Cervi” and more precisely between “via Roma” and “via XX Settembre”. The sculpture is positioned on a low curved steps platform paved with porphyry blocks.

On the external side of the platform there is a granite slab with a bronze inscription that reads: “NOW AND ALWAYS RESISTANCE” .

Three concrete strips rise from the basement. They form the pedestals of the three figures that make up the monument. The sculptures represent “The Martyrdom”, “The Recovery” and “The Liberation”; they all bear the artist’s signature.

In Rome Fellini came into contact with a group of artists from Rimini living there at the time, among them there was the young Elio Morri .
They built a friendship based on a sincere and mutual respect  as we can infer from the telegram that Fellini sent to the sculptor’s wife, Enza, on  the day of his friend’s death .

“It was painful to learn of my dear friend Elio’s death.  It is thanks to his fervent and passionate example of creativity that I realized that art could have been also my way.

A big brotherly hug dear Emma hoping to see you soon and talk about my dearest friend.”