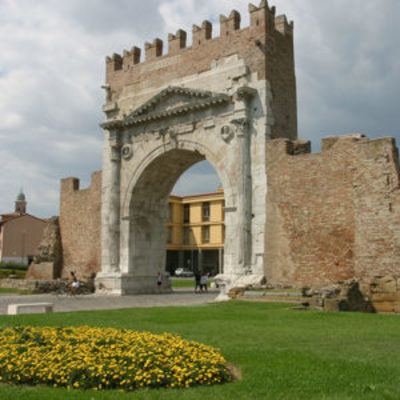 With Tiberius Bridge, the arch of August  is one of the symbols of the city; built to honour the emperor August Caesar Ottaviano in 27 B.C., the imposing monument was both the city gate ( porta urbica) and honorary arch. The arch is the starting point of one of the most important roads of the Roman world, Via Flaminia  that connected Ariminum to Rome. On the top of the arch most probably there was a statuary group portraying a quadriga driven by the emperor himself. It remained Rimini city gate up to the fascist period, when, by order of Benito Mussolini in 1937, the surrounding walls and the houses nearby  were demolished. Since then the door has looked as it is today deprived of its original function but still witness of a glorious past.